Bologna setting opened a window to heritage politics in Italy

The complex situation of Italy was very much on the agenda the opening day of Eunamus’ conference “Building national museums 1750-2010”. The 150th anniversary of the Italian state has prompted discussions on the creation of a new national history museum. In her speech Ilaria Porciani elaborated on the differences between the Italian initiative and the ones in France and Spain. In Italy, it is neither the state nor grass roots movements, but public intellectuals, who have advanced the proposal. For the time being, the outcome is very hard to predict. Not only is there a lack of funding, as culture and heritage are very low in priority in the state budget, the political landscape is also very polarized. In addition, ethnic nationalism is competing with religious nationalism promoted by the Vatican.

The situation is even more complicated due to migration across the state border. Italy has in recent years seen a great number of people entering its territory. The future of museums and libraries in an age in which migration is a key question is the subject for the MeLA project, presented by Luca Basso Peressut. In this project, migration is multi dimensional, not only about dispersions of groups in diaspora, but also about individual nomadism, migration of culture, of things and of knowledge and information. What caught my attention in Luca Basso Peressut’s presentation was the way he connected to art. The concept of museum as a contact zone was for example captured by the Iranian visual artist Shirin Neshat’s image of two connected hands. The MOMA’s exhibition “The museum as a Muse” was mentioned as inspiration and the MeLA project includes artistic research as a mean to explore the future role of museums. 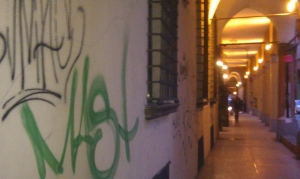 Margherita Sani, from the Istituto Beni Culturali Regione Emilia Romagna, reported on several projects in which regional museums had found ways to connect across state borders. According to Henrik Zipsane, head of the Swedish regional museum Jamtli, Italy is cutting edge when it comes to European funding for regional activities. Maybe this orientation toward European funding is a necessity. Even though, or perhaps because, Italy is peppered with cultural heritage, Italian heritage is in need of protection. Donata Levi, from the organisation Patrimoniosos, showed concern about the current situation, including for example a prioritization of visitor numbers rather than knowledge about the collections in Italian museums. 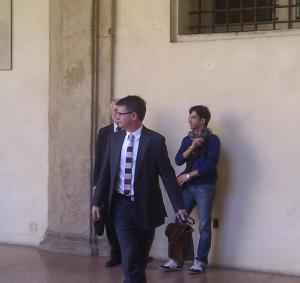 Peter Aronsson just about to enter the auditorium

This entry was posted in Eunamus' conferences, Research. Bookmark the permalink.