Museum beyond the nation – report from a conference session

The last two years archaeologist Johan Hegardt has been working on a project on the history of the Swedish National Historical Museum with Patrik Nordström, Fredrik Svanberg and Malin Grundberg. 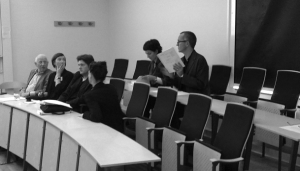 In this blog he reports from the session, “Museum beyond the nation”,  he and his colleagues organised at Places, people, stories an interdisciplinary & international conference. Linnaeus University, Kalmar 28-30 September 2011.

A museum is a place where stories and people meet. A museum is also very much an interdisciplinary and international spot, even though, according to my view, many national museums have problems accepting this. The idea of this session was to discuss museums in a setting beyond the nation or the national, or looking into museums that have found themselves locked inside the nation. To broaden the Swedish perspective, Dr Kylie Message from The Australian National University in Canberra, Professor Dan Karlholm from Södertörn University in Stockholm and Sir David Wilson from the UK were invited to join researchers from the National Historical Museum.

Kylie Message’s paper ”Museums, Topicality, and Collecting Today ‘For Tomorrow’” focused ”on the controversies that arose in the 1960s from the attempts of curators at the National Museum of American History to collect controversial contemporary materials that reflected current-day socio-political change and debate”.

In her paper ”The National Historical Museum in Stockholm from a gender perspective”, Malin Grundberg investigated how many of the museum’s temporary exhibitions had women or femininity as explicit themes. Only 4% of the 300 temporary exhibitions have been on women. Thus, at the National Historical Museum, “the history of Sweden has been the history of men”.

Two papers addressed museum architecture. Mattias Ekman’s paper ”An Edifice of Stories. Personal, Professional, and National Remembering in the National Gallery, Oslo” addressed ”the current use of the building as a spatial framework for the organising, retrieving and disseminating of memory”. An interview with author Gerd Brantenberg, whose relation to the gallery is marked by a significant childhood experience, and one with a senior curator at the gallery, Nils Messel, who structures knowledge of the institution with the help of the building, enables a distinction between personal and professional use of “the museum as a mnemonic instrument”.

In his paper ”The New Neues Museum in Berlin: Accumulating Concepts of History”,
Dan Karlholm situated ”the recently renovated and reconstructed Neues Museum within its unique place as one of five museums of art on the so-called Museumsinsel in Berlin. The whole ‘island’ was granted World Heritage status in 1999, but the Neues Museum was only re-inaugurated in 2009. Neues Museum has transformed into a layered artefact itself, with traces of several historical periods, each carefully preserved in accordance with the Venice Charter.” Karlholm discussed ”whether this museum represents a new type, premised on a new concept of history, compared to traditional, national, historicist as well as modernist or even postmodernist museums”.

Two papers considered the concept of national museums in territorial scales other than the nation. Zeljka Miklosevic explored in her paper ”From National to Regional Narratives” the concept of ecomuseums and its relationship to national museums stressing that ”such a development projected in the future might lead to the formation
throughout Europe of numerous museums of regions which could more genuinely create a sense of place through regional narratives, and thereby replace the domination the national museums have had for such a long time”.

In the last paper, ”The British Museum. Purpose and Politics, Past and Present”, former
head of The British Museum Sir David Wilson underlined that ”nobody knows where the name ‘British Museum’ came from. It emerged in 1753 as the name of an Act of Parliament. As a product of the Enlightenment, however, there was no attempt to identify it with the nation, rather it was seen in a universal context at a time when there was a firm belief in intellectual minds that the whole sum of human knowledge could be retrieved and presented in a systematic fashion to the thinking public. The museum embraced all human knowledge in this spirit.” From my point of view, it is interesting that ”this was to narrow ‘national’ museum is perhaps best demonstrated by the fact that there was no British Gallery in the Museum until the middle of the nineteenth century, when throughout Europe such museums were springing to life with growing nationalism”.

The different papers provoked many questions and it was difficult, I admit, to stop the discussions even though time was running out. The seven papers will be published
early in 2012.

The project A historical museum and how it shaped Sweden is hosted by the National Historical Museum, Stockholm, and is financed by The Royal Swedish Academy of Letters, History and Antiquities and the Swedish Arts council. A generous grant from the Academy enabled all participants to travel to Kalmar. The project is interlinked with the EUNAMUS project, which is beneficial for our little group of researchers.

This entry was posted in Uncategorized. Bookmark the permalink.