At the heart of the three-year research programme Eunamus is the contemporary and future roles of European national museums. To develop the project’s research on identities in museum, its researchers gathered in Athens 23 – 27 April for workshops and a public day with open lectures. The occasion brought together researchers from around the world, who discussed a range of related themes from European and non-European contexts to inform and enrich the Eunamus research consortium. The headline of this blog post points to some of the keywords. Among the guest speakers were Kylie Message, Conal McCarthy, Rhiannon Mason,  Huism Tan at the National Heritage Board Academy, Singapore, John Orna-Ornstein, Robert A. Saunders and Gwen Bennett. If you are curious on Rhiannon Mason’s ongoing research on museums and postnationalism read Mela News #03 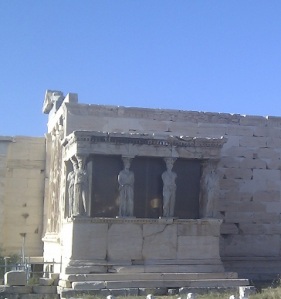 Copies of the original caryatids at Acropolis.

The workshops also included some fascinating, critical and reflexive talks of Greek academics. Antonis Liakos talked around the current function of Acropolis and its new museum. He pointed to how the classical heritage has become detached from both its historicity and contemporary everyday life when entering a transnationally determined aesthetics. Continuing the theme of the loss of the elgin marbles and especially the absence of one of the six Caryatids from the Acropolis museum, Dimitris Plantzos talked about Greek museums as sites of trauma. Arguing that the classical heritage had been colonised by Western archeologists and Classicists, he exemplified how contemporary Greece reclaims its material past in repetitive enactments and mimicries. Read more in the journal ANTIQUITY 2011: 85.

In the same critical spirit, Manussos Marangudakis suggested that current processes of developing a pan-european identity is operationalized by elites. Andromache Gazi was instead invited to discuss how museums use space and the design of exhibitions to locate people in the social world, to produce maps of identities and points of belonging. She suggested that museums navigates between the two pools of exploring identities and confirming identities.

Taken together, the workshops and lectures re-framed Eunamus research on the implicit Europeaness in national museums, the interplay between regions and nations, and the representation of minorities in museums.

The contemporary uses of the classical heritage will be further developed by Alexandra Bounia at the conference Museum Policies in Europe  between 1990 and 2010: Negotiating Political and Professional Utopia in Oslo 27-29 June.