Posted on December 6, 2012 by Bodil Axelsson

Read more on the ways in which national majorities and minorities relate to national museums in two open access reports produced by the Eunamus project.

Voices from the Museum: Survey Research in Europe’s National Museums

Data are presented both as an aggregate of all respondents and broken down by individual museums. Asked about their purpose in visiting a national museum, 8 in 10 respondents said that they were seeking either “pleasure/entertainment” or “education/learning”.  While they weren’t explicitly there to “experience the past”, they did feel that preserving and remembering national historic heritage was the legitimate role of a national museum. Visitors also said they expected “national” museums, by definition, to present a complete story of the nation. Outside of Germany – especially in young nations and former East Bloc countries – national identity formation continues to dominate over regional or European identity.

Similarly, visitors to the museums in each country claimed a single national identification over pluralistic alternatives such as hybrid national identity (two or more heritage roots), a transnational (European) identity, cosmopolitan ideals, universal humanity or an individualistic identity.

The visitor surveys indicate that national identity for both the museum and its visitors continues to play a central role in peoples’ conceptions of self-in-community. 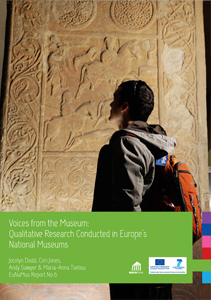 Despite collectively forming a substantial section of the European population, minority experiences were largely absent from national museums, a situation that was recognized by less than 10% of museum visitors. Moreover, as noted by participants in the EUNAMUS focus groups, non-European minorities do not expect to be represented in Europe’s national museums.

EUNAMUS data suggest that European minorities regard European citizenship positively because it allows them to retain their own identity. Non-European minorities, however, are more ambivalent. For them, aspects of European identity can help safeguard their rights, but other aspects can present further barriers to integration. Personal and national identity was especially complex and important to minorities because they were constantly negotiating their relationship with the dominant culture, but the silence in national museums and lack of recognition of their contribution to national society only confirmed their status as “Other”.

This entry was posted in Cultural policy, Research. Bookmark the permalink.